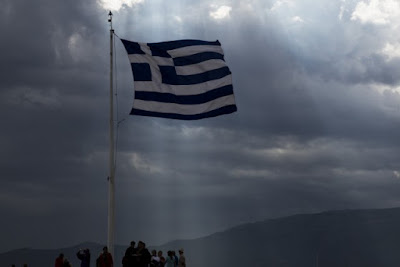 AP Photo/Petros Giannakouris
A Greek flag waves as the sun's rays shine through clouds at the ancient Acropolis hill, in Athens, Monday June 22, 2015.
James K. Galbraith is the Lloyd M. Bentsen Jr. Chair in government-business relations at the Lyndon B. Johnson School of Public Affairs at the University of Texas at Austin, a senior scholar of the Levy Economics Institute, and chair of the Board of Economists for Peace and Security. His most recent book is The End of Normal: The Great Crisis and the Future of Growth.

On June 8th, I had the honor of accompanying then-Greek finance minister, Yanis Varoufakis, to a private meeting in Berlin with the German finance minister, Wolfgang Schäuble. The meeting began with good-humored gesture, as Herr Schäuble presented to his colleague a handful of chocolate Euros, “for your nerves.” Yanis shared these around, and two weeks later I had a second honor, which was to give my coin to a third (ex-)finance minister, Professor Giuseppe Guarino, dean of constitutional scholars and the author of a striking small book (called The Truth about Europe and the Euro: An Essay, available here) on the European treaties and the Euro.

Professor Guarino's thesis is the following:

“On 1st January 1999 a coup d'état was carried out against the EU member states, their citizens, and the European Union itself. The 'coup' was not exercised by force but by cunning fraud... by means of Regulation 1466/97... The role assigned to the growth objective by the Treaty (Articles 102A, 103 and 104c), to be obtained by the political activity of the member states... is eliminated and replaced by an outcome, namely budgetary balance in the medium term.”

As a direct consequence: “The democratic institutions envisaged by the constitutional order of each country no longer serve any purpose. Political parties can exert no influence whatever. Strikes and lockouts have no effect. Violent demonstrations cause additional damage but leave the predetermined policy directives unscathed.”

These words were written in 2013. Can there be any doubt, today, of their accuracy and of their exact application to the Greek case?

It is true that Greek governments in power before 2010 governed badly, entered into the euro under false premises and then misrepresented the country’s deficit and debt. No one disputes this. But consider that when austerity came, the IMF and the European creditors imposed on Greece a program dictated by the doctrines of budget balance and debt reduction, including (a) deep cuts in public sector jobs and wages; (b) a large reduction in pensions; (c) a reduction in the minimum wage and the elimination of basic labor rights; (d) large regressive tax increases and (e) fire-sale privatization of state assets.

The connection of this program to growth and recovery in Greece was wholly fraudulent. Overruling internal doubts, the IMF issued a forecast that the program would cost Greece a recession of just 5 percent of GDP, lasting one or two years, with full recovery by 2012. In fact, the Greek economy collapsed under the strain; there was a decline of over 25 percent and no recovery for five years. Thus Greece has lost more than a full year's worth of annual output, and has seen the near-destruction of its major social institutions. It was in debt-deflation, not recovery, at the end of 2014.

The failure of the creditors' program destroyed three prime ministers in Greece: George Papandreou, Lucas Papademos, and Antonio Samaras. It also destroyed the entire political order, dominated until then by New Democracy and PASOK. And so in January 2015 the Greek people elected a new government, built on a left-right coalition between two parties that had never before seen power, SYRIZA and ANEL, linked only by shared commitment to changed policies for Greece, inside the Euro and inside Europe.

The new government did not ask for new financial aid. The government always understood that the country would have to live within its means going forward. It accepted major elements of the previous program, with respect to taxes and public administration. What it requested, primarily, was respect for labor rights as guaranteed in all other European countries, protection of low-income pensioners, reasonable management of privatization, and relief from destructive austerity and unpayable debts.

What was the response? The European creditors and the IMF met the Greek proposals with hostility, obstruction and refusal. The governments of Finland, the Baltic states and Slovakia rejected them on ideological grounds. Those of Spain, Portugal, and Ireland rejected them from fear of the effect on their own politics. Italy, France, and the Commission expressed sympathy but did little. Minister Schäuble spelled out the choice: Greece could either adhere to the previous program, in full, or else leave the euro and perhaps also the European Union.

From the beginning, this position was backed by threats. In late January, Eurogroup President Jeroen Dijsselbloem, visiting in Athens, threatened Greece with the destruction of its banking system. On February 4th, the ECB revoked a waiver permitting Greek banks to discount government debt, and so provoked a slow run that culminated in late June, meanwhile Greece made 3.5 billion euros in payments as a sign of good faith. When the Greek government, frustrated and broke, turned to a referendum, the creditors retaliated by closing the banks and imposing capital controls. When the Greek people stood up and said “No,” the retaliation deepened and in July the government was forced to its knees.

Since then, on three occasions and most recently on August 13, the Greek Parliament has been obliged to pass packages of legislation dictated from Brussels and Berlin. The legislation raises regressive sales taxes, while eliminating a withholding tax on capital transferred abroad. It cuts pensions—in some cases below 100 euros per month—and sets the stage for further cuts to come. It sets the stage for ongoing cuts in the public sector, in health and education, cuts in wages, for the liquidation of many private businesses, for a wave of home foreclosures, and for the privatization at whatever price—over 30 years—of remaining public assets, including land held by the Greek government. It removes key areas of public responsibility, including economic and budget statistics and tax collection, from Greek hands and places them under the authority of the creditors. Going into the structure of the Greek economy in minute detail, the list of imposed changes is very long.

The European treaties hold that that the European Union is founded on the principle of representative democracy; there is even a “principle of proximity” which holds that decisions should be taken by governmental levels as close as possible to those being affected. But within the Eurozone, this is now inverted. Greece is a colony; its fractious citizens have been dispossessed, and the place will be “modernized” against their will. Those who cannot bear it will have no choice but to leave, or again to rebel; those who do neither will likely sink back into the deep psychological depression that prevailed before the rise of SYRIZA briefly suffused the country with hope.
The hope for negotiated change within the euro has been tested, with brutal results.

For progressive forces elsewhere in Europe, and especially for the young, these facts pose a difficult challenge.The hope for negotiated change within the euro has been tested, with brutal results. The fact of technocratic dictatorship within the euro is plain to everybody. Voters in the next country to rebel against the stranglehold of Eurozone policies will take note. That Greece was forced to explore the means of exit will also bear on future experience, as with improved knowledge and contingency planning—planning that will now become habitual and more-or-less open for every opposition movement faced with the possibility of power—the cost of making that transition, seemingly prohibitive to the Greeks this past spring, will decline.

Immediately, the Greek defeat has weakened the rising force in the next country to face elections, namely the anti-austerity, pro-European upstart party Podemos in Spain. But the effect in Ireland, which is less wedded to the euro, could be different; Ireland trades with the U.K. and the U.S. and does not have the same emotional links to Europe as Spain or Greece. And then the scene will shift to Italy, still in recession and political flux, and to France, which already has a powerful anti-euro party on the Right, the National Front of Marine LePen.

These political consequences will keep the euro under strain, deepened by the ongoing failure of the neoliberal economic regime. It therefore seems likely that the Euro will, at some point, in some country, crack. The decision to initiate a breakup could come from the left or the right. In any case such a decision will destroy, as events in Greece have destroyed, the previous political structures. A breakup, if it goes badly, could make things worse. What will happen to the European Union after that, is anyone's guess.

Professor Guarino's proposal is to try to save Europe—that is, the European Union—by repealing the illegitimate regulations that now strangle it. It is to refound the Union on the letter and spirit of the Treaties that were usurped in 1999. Those treaties firmly assert the priority of economic growth and the principle of democratic sovereignty—equally applied to countries in or out of the euro. Those are principles that have no practical application inside the Eurozone today.

Can the euro be reformed? The Greek case will persuade many that it cannot. And if the alternative is disorderly and uncontrolled exits, precipitated by countries in extreme straits and political upheaval, then it might be wise to prepare some new system, one that might, at the right moment, replace the euro with a more flexible, but still-managed, multi-currency scheme. This is not an outlandish thought—after all the gold standard that collapsed in 1933 was replaced in 1944 by just such a system, devised at Bretton Woods.

The trick is to get the job done without the intervening chaos. 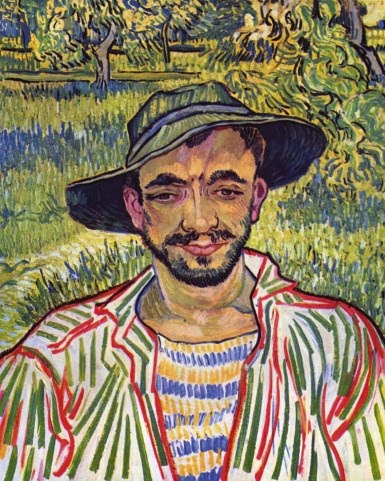 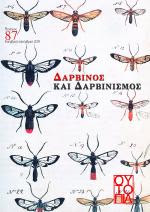 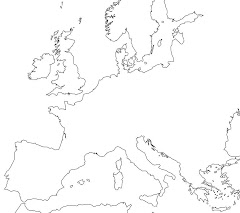 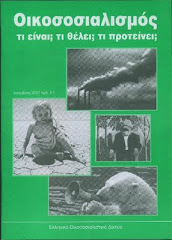 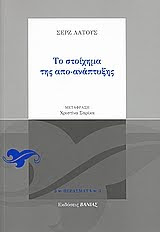 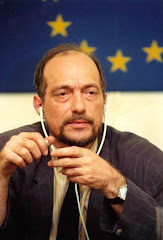 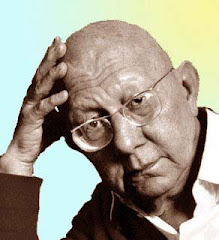 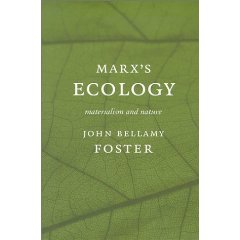 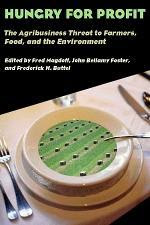 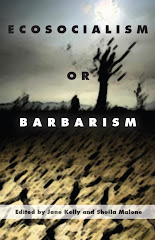 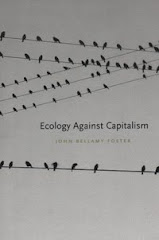